Bear Possibilities is 99¢ for April Fool’s! Read an excerpt 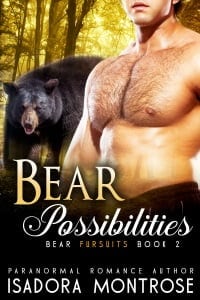 Will wasn’t surprised when ten minutes later a white car with the Menominee Tribal Police insignia pulled up and a large heavyset man in navy uniform pants and a shirt with a corporal’s double chevron got out. He set his cap on his head and approached Will.

“Got a report of a stranger out here,” he said. “What’s your business?”

The officer looked from the wallet Will had opened to his face and back again. He inclined his head. “Captain Enright,” he said formally, “Any relation to that fella what got the Medal of Honor last month?”

“Hmm.” The corporal handed Will’s wallet back. “Shelly’s worried because you’re out here.”

“Fair enough. Tell you what. Martha will be about another thirty minutes. Why don’t I go reassure Shelly and then we’ll wait together?”

They sat on the rocks and talked. Corporal Francis Payawasay had served a tour in the army as an MP before joining the Tribal Police. He had seen combat in Afghanistan. What about Will? Will divulged what he could of the three tours he had participated in.

“My family is mostly in Washington State.”

“My family and my clan are from right here in Wesheno. Shelly and Martha are Ancestral Bear Clan too. We’re all relatives.” Payawasay tapped the bright blue patch on his hat, where a black bear dominated.

Abruptly Will realized he was being asked about his intentions. He sniffed. Nope, not a shifter. Just a big fellow. Ancestral Bear Clan. Go figure. His mate had run home when things got hairy. Smart girl.

“What does that mean?” he asked mildly. “You guys cousins?”

“It means Shelly and Martha are my clan sisters.” Payawasay’s broad, pleasant face got hard and stern, and his tone severe.

“It’s good they have family looking out for them.” Will paused a beat. “You seen anything of Shelly’s father?”

“Kyle Brown. He got out of Folsom last week.”

“No shit? I heard he got twenty-five without parole.” Payawasay was skeptical.

“Officers who testified as his trial were charged with perjuring testimony. Judge decided Brown could walk.”

“Jesus.” Payawasay got to his feet and moved rapidly toward his vehicle and his radio. He spoke urgently and answered some questions, before returning to the rocks. He sat down again. “Got someone looking into it,” he said. “We’ll watch for him.”

A little blue Kia drove up and parked in the narrow driveway behind the Tribal Police car and Will’s SUV. Both men stood up. A tall woman got out and reached in for her tote. She strode over to the two men.

“Hey, Martha. Good to see you.” Will didn’t move. His mate looked shattered to see him.