Snippet of Dazzled by a Dragon! 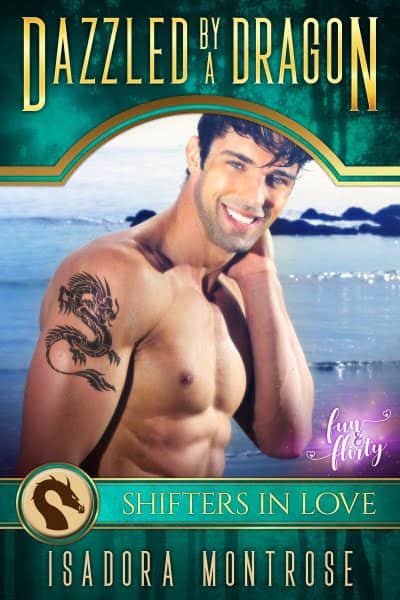 Dazzled by a Dragon is coming soon!

In the Amazon store May 9.

Dazzled is the final book in the Mystic Bay series. But we haven’t seen the last of the people of Mystic Bay!

The hero of Dazzled is a dragon with some issues. Kim is a crystal worker and Keeper of the secret crystal caves that lie beneath Mystic Bay. When Ian stumbles into them, it’s time for some hijinks, a few misunderstandings, and a whole lot of loving.

Here is a sneak peek of Dazzled. Enjoy!

Pre-order Dazzled by a Dragon Now!

He couldn’t maintain his calm in the face of Kim’s fury. Hot words leaped to his lips. He knew as soon as he uttered them that he had made a mistake.

“I don’t think you have any room for complaint. If I can swallow my disappointment that you’re no virgin, you can swallow yours that your mate is a dragon.”

Her eyes narrowed. “No. Virgin.” One naked foot was tapping. “No. Fricking. Virgin. Why in the name of all that glows, would you think I was a fricking virgin? At. My. Age?”

“Get dressed and I’ll explain.”

So then he had to wait while Kim clomped off to the bathroom and showered. She took her time. He had plenty of time to regret his hasty words. This was not the measured way he had intended to raise the thorny subject of firelings. Or rather no firelings. But at least he had time to make breakfast.

She ate his scrambled eggs and toast as if they choked her. Or as if her throat was tight with rage. He tried to explain how dragon reproduction worked. She listened as if he were some wild-eyed guy with a sign who had stopped her on the street to explain that aliens were coming.

What on earth was the matter with her?

“Let me see if I have this straight,” she said when he had ground to a halt. “I thought we were just two sensitives with the hots for one another, while you were actually intent on turning me into a giant reptilian clone?”

“First off,” he said, “Our feelings are perfectly real. And second, dragons aren’t reptiles. They’re actually a highly modified type of bird.”

Hazel eyes rolled. “Same difference. You planned to turn me into a dragon without my fricking consent.”

“You don’t understand.” He started over.

She heard him out in deafening silence. And then she said, “You need a virgin in order to have babies?”

“Not exactly. I need a dragoness. Only virgins may be turned into dragonesses.”

“And you assumed I was one because?”

His face felt like a furnace, but he kept his temper this time. “Fate set you in my path.”

“Fate.” Her voice was skeptical. Those hazel eyes were looking at him as if he was the bug in her salad. “I’m supposed to believe you’re in love with me because of fate?”

“Love has nothing to do with it!”

Buy Dazzled by a Dragon now!