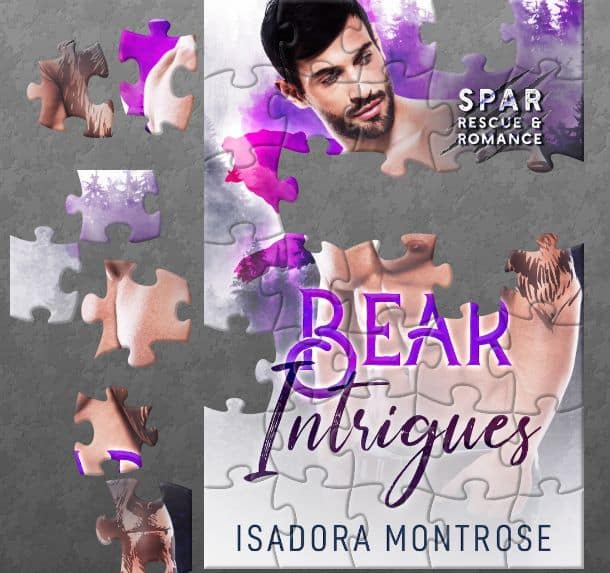 In the Amazon store Aug 27.

The thrilling adventures of SPAR: Rescue & Romance continue with bear shifter Colin and his fated mate, Deanna, a deer shifter. Vector still represents a serious threat to all members of the paranormal community.

Bear Intrigues has another of my fierce & feisty BBWs. Deanna Mead is a doe on the run from a clan of deer shifters convinced she poisoned the son of their leader.

Colin Justice, the romance-challenged bear shifter from Dragon Intrigues, is back. SPAR has tasked him with producing psi-weaponry to counter Vector’s. On the first leg of his mission he encounters Deanna and intervenes to save her from assassination. 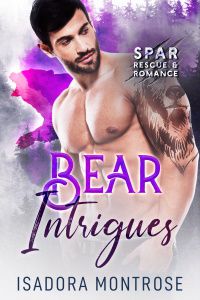 COVID-19 is absent from this series. Let’s assume the stories take place before the pandemic changed the world. We are all suffering enough without adding that grief to our romantic fiction.

I’m still sticking close to home, but I do Zoom-yoga five days a week and aim for a walk every day. I cook even more than I used to, and drink my glass of wine while the sun goes down. Small pleasures and little rituals give our lives structure even during our enforced isolation. I heartily recommend that you force yourself to enjoy life.

Please enjoy this excerpt from Bear Intrigues. Let me know what you think!

The smell of the sea got stronger. A weather-beaten shack with a shingle roof appeared among the trees. “Stop here,” he ordered.

He got out, opened the double doors of the boathouse and waved her through. He shut them behind the SUV and braced the doors with a two-by-four dropped into heavy metal brackets. He turned on the lights. His cruiser bobbed low. Too low. The tide was still coming in, the water still too shallow to take the boat out. He left the doors to the sea latched and returned to the SUV.

Damp ocean air filled his lungs. The briny scent pleasantly spicing the doe’s natural fragrance. “We have about an hour until the tide rises enough to leave. Which gives us time to sort this out. Let’s see if I have this right.” He tried and failed to keep the fury from his voice.

What was there about this woman that sent him ballistic? “You have knowledge and samples of a substance that instantly drops an attacker running on psi and adrenaline. A freak armed with a psi-weapon. And you can’t think of any reason Ransom might be after you or your formula?”

“Don’t shout at me,” she yelled right back. “How would he know about it? I didn’t even brew a batch until his goons showed up and trashed my apartment in Wilham. Months after the Ransoms had targeted me.”

With an effort he controlled his temper. “What about the rest of your family? They leave a trail of incapacitated ruffians behind them?”

“Of course not. The spray is strictly for self-defense. We’ve always kept the recipe entirely within the leash. And really it hardly amounts to more than an herbal remedy. And for the record, it works on non-sensitives too.”

“He has nothing to do with it.” Her throat moved convulsively and fear tainted her ambrosial scent. “On the other hand, apparently SPAR does.”

He swallowed the tirade on the tip of his tongue. She had come close to being killed twice today. He supposed she was entitled to an explanation. In fact, not knowing about SPAR’s hunt for Vector would probably endanger her further. She needed to be aware that she had attracted the attention of a vicious and vindictive psi-mob. Better to scare her witless than have her continue with the kind of recklessness that pitted a water pistol against the real thing.

Deanna snorted genteelly. “Just a secret organization. No worries. I’m cool with the existence of the paranormal police. Not as if regular law enforcement can deal with the freaks. But why are they interested in me?”

“You’re right. The authorities can’t police what they don’t recognize. Can’t take down what they’re not equipped to confront. Absent duly appointed paranormal police, our world needs SPAR. I’ve been doing some work for them. So has my company. Have you heard of Justice & Tremaine Research Associates?”

Her eyes widened and then she nodded. “Well sure. You have a massive plant in Olympia. Right on the water. Still has machine gun turrets left over from the Second World War. Still does work for the military. Produces everything from armor to field rations.”

And the rest. “That’s us. What is not generally known is that we maintain a second campus on Jutway Island. As I said before, the place is impregnable. And the lab is practically a bunker. No one will get close enough to harm you.”

“Thank you,” she said doubtfully. “But I’m not much for going underground. And you still haven’t told me why SPAR would care about me.”

“You’ll be in my house. Entirely above ground. Think of it as a much-needed vacation in the beautiful Anacortes. Your choice of a view of the hills or the ocean.” She was going to look good in his house, sitting at his table. Sleeping in — the spare room, he reminded himself sternly.

“And SPAR is interested in you,” he said through his teeth, “because you are being hounded by psi-criminals. Just part of the service.”

Her breath settled. Her lovely scent filled the air again. She smiled. “Okay. I’ll be safer on your island than wandering along the West Coast.” Her eyes said, who keeps me safe from you?

Time to sort out a few stray facts. And lay down a few rules to this reckless doe. “Now, the freak we left half-dead back there, do you know who sent him after you? Who else have you pissed off?”

“Besides you?” she asked sweetly. She wrinkled her nose. “Just about has to be Ransom, doesn’t it?”

“Possibly. More probably that freak is part of the organized-psi-crime syndicate SPAR is currently hunting. Ransom may or may not be in bed with our attacker and his handlers. But Vector is the ultimate user. Chews up its associates and spits them out on a regular basis. If Ransom has gotten cozy with them —” He drew his thumb across his throat.

She winced. “Vector being the psi-mob rather than our freak?”

“Correct. Vector is SPAR’s codename for the criminal ring. Our freak is probably a low-ranking employee. We know he’s a psychic because he was issued one of their dirty-glass weapons.” He stared at her until willing her to be scared.

“Psi-infused artificial crystals. In Vector’s case they use them to power lockpicks and other weapons. The freak’s gun opened your door like it was never locked. And I’ll bet it would have killed you if you hadn’t shot him first.”

Damn straight. “Could be that Vector will solve our problem with him themselves. They’ve littered the Pacific Northwest with their victims. In the last month their known kills just in the Seattle area topped a dozen. And there might be some they hid more carefully.”

She paled. “Why isn’t that in the newspapers? Even the cops should notice a bunch of dead bodies.”

“Vector tends to stage the deaths of their associates as accidental drownings, overdoses, or drug deals gone sour. But when the deceased are all low-level psychics with criminal histories, the truth leaps out of the data. At least to SPAR. If they have you in their sights, a squirt gun isn’t going to save your sweet ass. Especially now that they know about it.” Against his will, he ended on another roar.

She narrowed her eyes at his tone, but she kept her own voice mild. “He’ll have amnesia to go with his brain fog and headache. At least, so I’ve been told.”

His fury roared back full force. He grabbed her shoulders, forced her to focus on him. “Amnesia? Is he going to forget the vomiting? The loss of his talent?” He hauled her closer. “You could have wound up shot today. Dead. Next time he’ll know enough to wear a visor.”

He kissed her, converting fear into passion. For a heartbeat, he thought she would thrust him away but she softened and returned his kisses as if she too were ravenous. As if she had forgotten he was a bear.