Marine Jack abandoned his curvy Hannah in order to complete his top-secret undercover mission in Uzbekistan. Can she forgive him for disappearing and lying to her in the service of his country?

Navy Seal Will had to lead his Joint Forces team instead of pursuing his terrified mate. Four years on, can they sort out their mistakes and have a second chance at love?

Col. Doug Enright isn’t looking for love. He and his wife married right out of West Point, but she died in Afghanistan leaving him grief-stricken. Beautiful, built-for-bear Madeline needs a protector. Can Maddie’s sophisticated wiles awaken this stoic shifter’s frozen libido?

Air Force Pilot Roman has been lost — presumed dead — for three years. But his fiancée still feels their bond as strongly as the day they met. Can Gabriella locate amnesiac Roman in the deep woods? Will the feral shifter she tracks down love her or eat her for lunch?

Bonus Short: Bearcubs for Christmas: Babies at Christmas! What could be cozier? Or more terrifying? When the bridge to town washes out, it will take Jack’s entire clan to make sure his Hannah is delivered safely of their premature triplets.

From the Cascades to the prairies of Colorado, the possessive Billionaire Oil Bearons pursue their fated mates…

Bear Skin: Bear shifter Zeke is half-dead when he pounds on Jenna’s cabin door. This she-bear doesn’t have much choice but to thaw the frozen stranger out – skin to skin. Will Zeke’s billions persuade his curvy angel to take a chance on a surly, wounded warrior?

Bear Pause: Laura will lose the ranch she’s spent ten years running, unless she rustles up a husband and child from thin air. Her burly new stable hand looks like he’s up for a temporary marriage. But alpha male Steve has a few secrets too, and he isn’t the kind of bear to abandon wife and cubs.

Bear Sin: Arrogant lawyer Patrick cherishes his slick veneer. But a chance encounter with country bear Heather is about to upend his life. A shotgun marriage, cubs on the way, and a missing bride will force his protective bear out of hiding.

Bear Fate: When she runs off to Colorado, she-bear Amber finds herself caught between two warriors. Filthy rich Calvin has spent his whole life stuffing his bear down deep, but Amber rouses it from hibernation. Lance Prescott returned from war with disfiguring scars and a wounded soul. Which of these alphas will win curvy Amber’s heart?

Adventure, steam, and humor blend into romantic stories that will keep you reading way past bedtime. Binge read the entire Billionaire Oil Bearons romances tonight. Guaranteed happy ever after. Contains bonus chapters of Beloved by the Bear.

This is a collection of previously published books, which are still available as standalone romances. 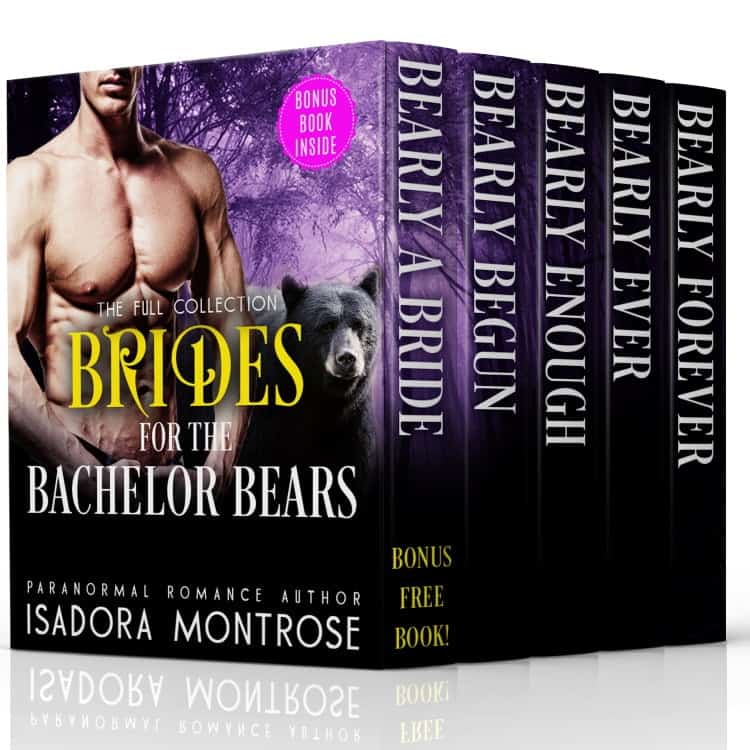 BEARLY A BRIDE: Green Beret Troy Reynolds lost his career, his girl and a leg when he was blown up in Afghanistan. Lisa Marie Johnston was widowed at twenty. Her twins are her whole life. When Troy saves her boy from drowning, these shifters are both swept away in the currents of passion. But can two wounded bears heal each other? This BONUS novella is exclusive to this box set.

BEARLY BEGUN, BEARLY ENOUGH: Backwoods bears Lenny and Joey Benoit left for the big city to seek the deep-bosomed, broad-hipped mates they crave. Joe and Len are good with their hands, and would die for their mates, but neither Erin nor Caitlyn want an HEA with a shifter. Are these urban heartbreakers going to wring their burly bears dry in bed and send them home still unmated?

BEARLY EVER, BEARLY FOREVER: Gideon and Asher Bascom’s inner bears fell hard and fast the second they met Allyssa and Julia. But these beauties don’t intend to marry a bear, no matter how sexy he is. Rejected lovers Gideon and Ash have to track their reluctant brides down. But before they can claim their mates they must thwart the evil stalking them.

Fair Warning: Graphic depiction of primal bearshifter lusts may be too much for some. These books contain many salacious episodes of wanton BBWs having their way with randy bears.

All 5 novellas are stand alone and have a HEA and no cliffhangers. 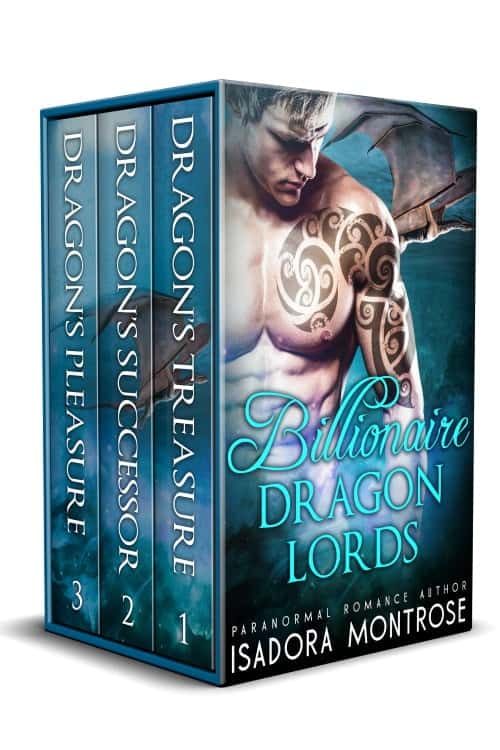 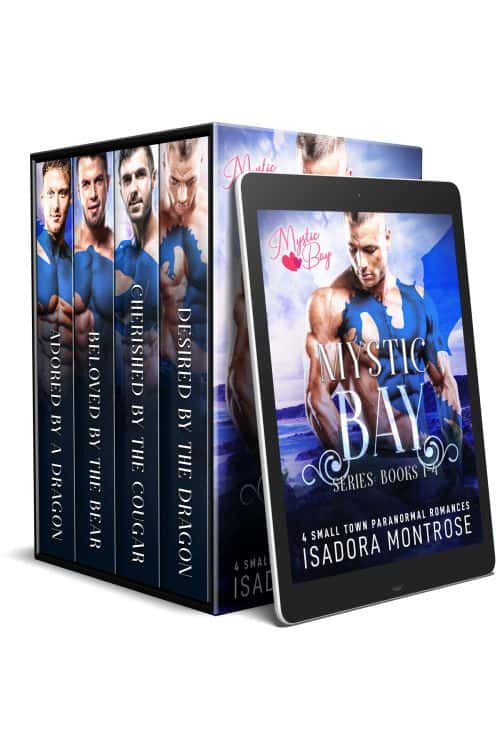 With a fairy as mayor and a wizard as her deputy, it ought to be easy for shifters to find their fairy tale endings in Mystic Bay. If only. While the paranormal is normal in magical Mystic Bay, predatory shifters are second-class citizens.

Take a walk on the mild side as Isadora’s quirky cast of small town paranormal characters help and hinder these four protective shifters’ romantic pursuits.

Desired by the Dragon: Billionaire dragon lusts for forbidden fairy princess. Moira is drawn to alpha male Quinn, but isn’t keen on becoming a twenty-foot reptile. And what’s up with his hoard of naked fairy pictures?

Cherished by the Cougar: Voluptuous single mom and witch Claudia wakes up married to a strange cougar. How can a forced match to a wounded veteran bring her a happily ever after?

Adored by a Dragon: Fed up with her neglectful mate, pregnant fairy Angelina runs off. Dominant alpha male Daniel arrives in hot pursuit, but his feisty fated mate won’t give him a second chance. How can this possessive dragon woo back his wife?

Mystic Bay Books 1-4 contains 4 steamy page-turners guaranteed to make you laugh and cry, and satisfy your deepest shifter needs. Each of these light-hearted, feel-good stories has a happy-ever-after ending. All these stories are also published as standalone romantic comedies, and may be purchased individually. Read them all today!

Four sizzling romps to lighten your heart and brighten your reader. Four steamy page-turning BBW/Shifter romances in one bundle. Guaranteed to give you that happy-ever-after feeling. Read them all today!

Fated for the Phoenix: Unicorn Samantha believes her phoenix lover perished in the accident that stole his memory. When amnesiac Rafe discovers her secret child is his, will fate grant this wounded warrior a second chance at love?

Bedded by the Bear: Pregnant she-bear Zoe is facing a shotgun marriage. Can her pal Mitchell save her? This take-charge bearshifter never planned to hit on his best friend’s hot little sister, but she seems to need him. Now curvy Zoe’s jumped from the frying pan to the fire.

Dazzled by the Dragon: Marriage-minded dragon pursues reluctant psychic. Ian claims curvy psychic Kim as his mate by right of capture on sight. He intends to keep his mate by fair means or foul. Kim fights her attraction to this dominant alpha male. Could fate really have bonded her to a predator?

With a fairy as mayor and a wizard as her deputy, it ought to be easy for shifters to find their fairy tale endings in Mystic Bay. If only. While the paranormal is normal in magical Mystic Bay, predatory shifters are second-class citizens. Take a walk on the mild side as Isadora’s quirky cast of small-town paranormal characters help and hinder these four protective shifters’ romantic pursuit of their reluctant soul mates.

The 4 books in this box set were previously published under the above titles. This is the second anthology in the light-hearted Mystic Bay series. Enjoy them all today!