Don’t dragons eat bunnies? Yup. Neil has always hankered after the rabbit-next-door. But before he can indulge his X-rated fantasies, he must save Blythe’s ripe round ass.

Photographer Blythe only meant to earn a little extra cash doing a small job for SPAR, the paranormal policing agency. Now she’s up to her bunny ears in trouble. Special Paranormal All Ranks is dealing with ruthless psi-mobsters and this cutthroat gang is after Blythe.

Wounded warrior Neil is recuperating from his last mission when Blythe’s home is bombed by a murderous arsonist. Rabbit shifter Blythe might be off-limits to a dragon, but he can’t sit on his hands while she’s attacked. But there’s more danger ahead than a mere house fire.

After he and Blythe are caught naked and making out in his kitchen, this protective dragon is thrilled when the head of his clan commands him to marry his own true love.

Too bad Blythe won’t take their engagement as a done deal. She’ll play along, and let him guard her from murderous thugs, but she’s keeping her own heart on lockdown while she plays with his.

With villains targeting his woman, and Blythe herself refusing to take their destiny seriously, this soldier has a full-time mission. They’re on the run, so there couldn’t be a worse time for a dragon to go wooing. Fate has set Neil an impossible task. Fortunately, Marines do impossible things.

Doe on the run trapped on island with ravenous bear. Will she make it off alive or in love?

Can a penniless grazer and a billionaire hunter lie down in peace? How about passion? This unlikely pair of shifters are drawn together by fate, desperation, and their mutual resolve to protect their world from freaks.

Former Marine Colin has been recruited by Special Paranormal All Ranks to help them take down Vector. Curvy Deanna has something that cut-throat psi-syndicate is willing to kill for. But what?

To foil Vector, Colin and Deanna must devise psi-weapons to battle an army of paranormal criminals. But the clock is ticking.

Take-charge Colin’s primary mission is to preserve this sassy beauty’s life at any cost. He’ll risk his heart & life to claim his stubborn soulmate. What will it take to make this feisty independent deer race headlong into a bear’s arms?

If bearshifters in thrall to their strong curvy mates are what you crave, join Colin & Deanna on their adventures.

Bear Intrigues is Book 2 in the paranormal romantic suspense series SPAR: Rescue & Romance. This full-length, standalone novel of romantic suspense is crammed with twists, turns, & thrills. All spiced with red-hot desire — with a happy-ever-after ending that’ll leave you wanting more. No cheating. No cliffhangers. 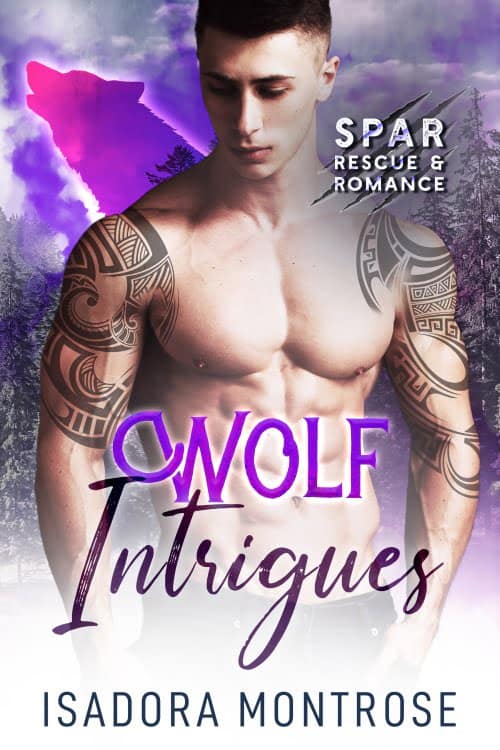 “I’m not your boyfriend, I’m your bodyguard. That means I make the rules.”

Artist Avery is the hereditary guardian of the hidden sea caves beneath her property. She’s single but not solitary. In her small town, she is surrounded by friends and neighbors. And of course she has her fox companions.

When Avery’s boat explodes, the shifter police, Special Paranormal All Ranks, send former Marine Sam Merritt to figure out who wants to kill this sassy vixen. SPAR fears her one-woman efforts to thwart drug runners has put her squarely in the sights of the psi-mob, Vector.

Or maybe she’s an arsonist running an insurance scam? It’s Sam’s mission to find out.

Lone wolf Sam takes one look at curvy Avery and is smitten by this independent beauty. Now he is fighting his attraction to a female of the wrong kind. Any wolf who mates with a fox has zero chance of finding a pack to call his own. And yet he longs to bite her.

When protective Sam moves into Avery’s cottage, her nosy family and neighbors assume an engagement. Worse than that, suddenly her sea caves are no longer secret. How can she trust this red-hot stranger? Because this wolf could steal both her heart and her treasures.

Get it in pre-orders! COMING OUT AUGUST 29