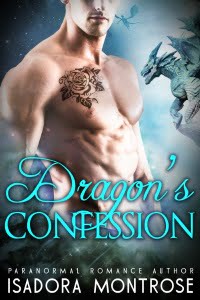 It’s an exciting day. Dragon’s Confession has been published not just on Amazon, but on Kobo, iBooks and Barnes & Noble! Because it is on other platforms, it will never be in Kindle Unlimited.

This week we get Chapter 7. Victor and Ingrid continue to explore their feelings as well as their passions & Ingrid gets a ring.

She felt even more languid as Victor carried her to her bed. She stroked his cheek with one hand.

Suddenly she was revved up again. “I still have more to give.” She laughed at his dumbfounded face. Her dragon made her feel like a sex goddess instead of a muscular-waisted, broad-shouldered athlete.

He set her on the bed. “You are going to be sore come morning,” he said backing away.

She giggled. His cock was rampant again. “Is that reloading action a dragon thing?” she asked.

He knelt on the bed and kissed her hard. “It’s an Ingrid thing.”

It hardly seemed possible, but his cock swelled and got longer and thicker. “Haven’t you.” His face was the color of borscht and his voice was an indistinct groan.

“Nope. I’ve been deprived.” She sighed.

“What about that Jon Avon who takes you everywhere?”

She didn’t want him to be jealous after all. “I’m only his beard. Jon is gay.”

“Oh.” He set his jaw and stepped backward. His chest glistened as sweat broke on his freshly washed and dried skin.

She waved her pussy at him. “I’m ready,” she whispered.

He caved and fell on her. In an instant, his mouth was covering her sex, licking and sucking. His hands held her thighs apart and kneaded them. The contrast between the delicacy of his lax tongue and the urgency of his calloused fingers on her sensitive inner thighs ratcheted up her arousal. His mouth tasted her folds an inch at a time.

Her clit was throbbing now, wanting a share, but he was still exploring her outer lips. He pulled one gently into his mouth and let his teeth lightly scrape the swollen flesh. The scent of his body intensified. His pleasure in her pleasure was a heavy perfume in her nostrils.

The air was buzzing with her moans and his slurping appreciation of her juices. It shouldn’t have been a sexy sound, but it was. Even the tender restraint of his hands on her spread legs was arousing. His thumbs made rough circles on the responsive skin there. She was squirming with excitement before he had moved to the other lip. And then he bypassed the inner folds and probed her opening.

She bounced. He laughed. A sound of pure masculine possessiveness and satisfaction. His stiff tongue circled the first desperate inch of her vag, went limp again and lapped her clit. She shrieked. His chuckle was a puff of breath on that sensitive nub. He lapped again. Blew gently.

He raised his head. “I’m not done yet, sweetheart. Soon, but not yet.” He went back to his leisurely tasting of her vulva. His tongue and teeth made her crazy.

He ignored her. He probed her opening again and lapped up the moisture that was spewing. His hum of contentment vibrated through her whole body. She convulsed.

He sat back on his heels. “Now look what you’ve done,” he chided. His chin was wet with her pussy juice. His mouth was puffy. “I’m going to have to start over.” He placed his mouth over hers and kissed her slowly. She tasted herself on his lips and tongue. Her scent mingled with his.

And then he was back, suckling her clit. Her aftershocks became stronger ripples. She climaxed again. “May I?” he begged.

For a moment she was too lost in her release to understand.

This time he pounded into her even longer. She grabbed his narrow hips with her shaking thighs and hung on while he pumped and she matched him thrust for thrust. The succulent gurgle of their joined body mixed with her shrieks and his deep rumbles of gratification. Her head fell back. The world went black at the edges. He bellowed her name into her wet hair.

“I love you,” she told him again and again before she fell asleep.

She was still fast asleep when he woke up. The sun was so low that the light was almost golden. He was ravenous. Ingrid made a tiny purring noise in her sleep and stretched like a cat. She needed to sleep. Her first true metamorphosis and flight had taxed even her honed muscles to their limit. She had also skipped lunch. He was a selfish bastard. He should have made sure she had something to eat before he jumped her bones.

Her bare shoulders were creamy but the hair covering them was a jungle of pale gold. She nuzzled her face into the pillow. Possibly his own hair was equally messy, but he kept it short. If his mother and sister were any guide, when she saw herself there would be hell to pay.

He felt fantastic. Rejuvenated. And guilty. She was injured. He had been rough and demanding when she was exhausted and hurt. Not that she hadn’t matched him. But just because she had enjoyed his violent lovemaking didn’t mean he had won her heart.

He remembered she had screamed that she loved him before she went to sleep beneath him. But what did that really mean? That she loved making love? They had been good together. As he had known they would be. And he had some new memories to keep him company. Because what they had enjoyed in the Loire was a pale shadow to this afternoon’s fun.

He padded out of bed to his room. His traveling hoard was safely stowed in its chest and locked away in the room safe. He retrieved it. He had chosen her ring long ago from the treasures bequeathed him by his paternal grandmother. The sapphire was purest Lindorm blue surrounded by perfectly matched diamonds. Large enough for Ingrid’s long fingers. Big enough to announce she was his. Better not say so.

Poetry. He needed poetry. He had promised her romance. If only he was a romantic sort of guy. But too many years of devoting himself to warfare had stripped any poetry from his soul. Not that there could have been much to begin with. Because let’s be honest – and he tried to be honest with himself – from the first time he had seen Ingrid, all he had thought about was burying himself inside her.

He threw on a robe, because his mother always said that nudity had its place and its place was not the kitchen. The ring went in his pocket. The jewel casket went back into the safe. Then he went in search of sustenance.

He ate and made Ingrid a sandwich. He carried it back into her room. She was still fast asleep. The sandwich was gone before he had gazed his fill. Ah well, he could make her another. A fellow had to keep up his strength.

The ring was burning a hole in his pocket. He smoothed it onto her finger and sealed it there with the traditional words. Peace filled him with a glow like schnapps. He climbed into bed and gathered his mate into his arms. He held her close, selfishly willing her to wake. And fell asleep waiting.