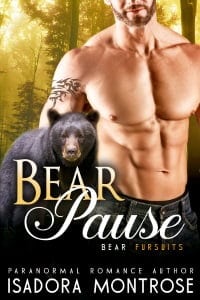 Starting at the end of May, I am going to share the writing of my next Bear Fursuits novel with you. Bear Fate will be the fourth Billionaire Oil Bearon book.

The Billionaire Oil Bearons kicked off with Bear Skin. Jenna and Zeke, the main characters in that story, turn up again in Bear Fate. Amber Dupré is the identical twin sister of Heather (the heroine of Bear Sin which just released in the box set Forever Love). I have returned to Success, Colorado and the Bascom Quarter Horse Stud and the characters you all loved in Bear Pause.

Lance works in the stables with Amber. He is a scarred veteran still recovering from the horrors of war. He is not a bearshifter, nor does he know that the Bascoms are shifters. Calvin is the CEO of B&B oil and independently wealthy. Like his cousin Patrick, he is a Captain in the Colorado National Guard. Like all the Bascoms, this bachelor is a big, handsome bearshifter.

Here are a couple of scenes from Bear Pause. In 2 weeks we will dive into Bear Fate.

Steve had learned a lot about Lance Prescott in the two weeks he’d been working in the stables. Prescott had been given a medical discharge from the Marines after an injury. He was Carlos’ de facto deputy and one of the trainers. Carlos Diego and Laura Bascom relied on him to organize the other hands and make sure things were done right. He and Steve had bonded over their work and become friends of a sort.

Lance waved a hand at the underside of the metal shingling. “You see daylight, Holden?” he asked.

Steve knew Lance was asking this question in all earnestness. The other veteran was legally blind in his left eye. To keep dust out, he wore a black patch over it when he was working in the stable or the barn. Now he squinted at Steve with his good eye. Steve tipped his head back. Several inch-long slits had been punched into the dimpled, dull silver undersides of the shingles. Dust motes floated gently in the daylight shining through.

“Someone’s been busy,” Steve said. “I think the damage will be easier to see from outside.”

“Get up on the roof, will you?” Lance ordered. “Take some photos.”

Without conscious thought, Steve moved into investigator mode. He took some pictures inside the barn, and climbed up onto the red metal roof. The red metal shingles had clearly been punched from below. The slits were jagged at all about the same length. A twenty-foot section of roof had been purposefully damaged and would have to be replaced before rain got in and wet the hay. He took his time taking pictures from several angles. It was pretty obvious that this was criminal mischief.

Lance was waiting for him when he climbed down. The other man looked worried and baffled. “Well?” He demanded.

“Don’t think he had anything to do with it,” Steve said. “This is the work of somebody with a grievance,” he said carefully. “You got any disgruntled employees?” he asked.

Lance shook his head firmly. “Nope,” he said. “We don’t have disgruntled employees on the Double B. Or in the stud. Miss Laura is a good employer. People tend to hang around for a long time. The closest thing we have to a disgruntled employee is that damn goldbrick Cory Saunders.”

Lance and Cory Saunders were arguing. At least Saunders was. Lance’s voice was cool and level as usual. Saunders was about Prescott’s age. But there the resemblance ended. Lance was quietly competent and generally popular with the other stable hands, as well as Carlos and the Bascoms.

Cory was a swaggering bully with a foul mouth. Steve had no sympathy to waste on a shirker who wound up spending twice as long on his tasks because he was made to redo most of them.

But what he really objected to was Saunders’ mouth. Steve was used to men who swore. Swearing was normal in the military. But he didn’t like it when men used coarse language in front of and around women with the plain intention of embarrassing them. This morning, Saunders was as profane as usual.

“Shit, I just said that I’d like to get me some of that sweet fucking ass,” Cory protested. “Of course she fucking wouldn’t look at you.”

Lance’s calm voice cut through Cory’s derisive bluster. “Teresita Delgado is only seventeen, and she’s Rosa Diego’s niece. If you can’t think of a better reason than that for leaving her alone, I’ll give you one. You say one more word to that young woman, good, bad or indifferent, and I personally will take you apart.”

“I’d fucking like to see you try,” sneered Cory. But Steve noticed he shut up. Smart man. Lance was quiet, and soft-spoken, and not terribly communicative. But if he said a thing he meant it. And he was stronger than he looked. Steve would not have challenged him unless he wanted a brutal fight on his hands. And he suspected that winning would not be a given.