Read a Snippet from Phoenix Aglow 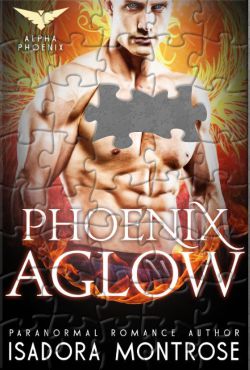 Download your free copy of Phoenix Aglow from Amazon!

“Shall we adjourn to the bedroom?” he asked as he picked her up in his arms.

Bev loved that Lincoln was strong enough to carry her down the hall to her bedroom without straining. She was glad she had taken the time to make her bed when she got dressed. And then she recalled the tangled pile of clothes that she had left on that bed.

“What’s the matter?” As soon as she stiffened he stopped moving. “Am I going too fast?”

“No,” she admitted. She leaned her face against his shoulder. “My room’s a mess,” she whispered.

He chuckled. “I think I can live with that. I’ll close my eyes.” He kissed hers.

Lincoln started walking again. But he didn’t dump her on the bed, he let her slide down his body while he went back to kissing her. Bev thought she was responding enthusiastically, until he raised his head.

“Clean up,” he said in resignation. “You’re not going to get into this, as long as you think that three unfolded sweaters and a pair of panties mean you’re a lousy housekeeper.”

Lincoln’s big hand massaged her neck under her curls. “So do I, sweetheart. I like things shipshape, a place for everything and everything in its place.” He kissed the back of her head. “The difference between us is that I don’t get distracted by a little chaos, if I think I’m going to get lucky.”

Bev spun around so fast her elbow collided with his six-pack. “You did not just say that?”

He pulled her against his hard, aroused body. He was openly laughing at her now. “Pick your stuff up, dear heart, we have a lot of making up to do.”

She gathered up her sweaters and folded them hastily and put them in a pile on her dresser. She tucked her panties underneath. Lincoln grabbed the edge of her puffy floral comforter and flung it back.

“I sure hope the fact that you were hiding those plain white briefs, means you’ve got some sort of lacy thong on underneath those jeans,” he drawled. “And maybe that bra I bought you in the Bahamas?”

She narrowed her eyes at him. “How did you know?”

“We’re bonded. Mates.” He picked her up by the waist and brought her face up to his. “I thought I explained how we phoenixes are.” He gave her a hard kiss on her open mouth. “We bond with our fated mates for life.” Another hard kiss. “Once we love, that’s it.” He punctuated his remarks with yet another kiss. “For the rest of your life, I’m going to be able to read you like a book.”

He put her down and steadied her. “Now, can I unwrap my Christmas present?”

Big hands pulled on the hem of her tunic, and slipped underneath to fondle the soft skin of her waist. Lincoln made a murmur of appreciation. “You. May I take your blouse off?”

Her face felt hot, Bev didn’t know why. It wasn’t as though this was the first time he had undressed her. “It isn’t Christmas yet.” Her voice came out sultry and throaty instead of matter-of-fact.

He wasn’t in any great hurry. His big calloused hands moved to her back and dipped low to her butt crack. They tap-danced there while he sucked on her bottom lip as if they had the whole weekend just to kiss.

Tell me your time in the comments!