Snowed in with the Bear is back! 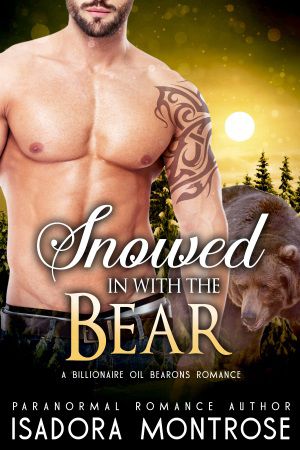 Snowed in with the Bear has been reissued as a standalone story. This is not a true new release, because Snowed in appeared in the 2018 multi-author holiday box set, Happy Howlidays. This bundle was withdrawn last month.

Calvin was one side of the lovers’ triangle in Bear Fate. I created Amanda Arruta both as comic relief and to give Calvin another love interest. While there is still plenty of banter in Snowed in with the Bear, there is also some nail-biting action and some serious loving!

Enjoy this snippet from Bear Fate as Amanda and Calvin’s claws-first relationship is established. This incident is in Amanda’s mind as she finds herself trapped in a snowbank in grizzly form…

He had to have endured worse humiliations than Arruta’s smirk as she told him to bend over so she could pick buckshot out of his naked ass. But not often and not more than once.

“Tell me again,” she said, “Why you were up a tree guarding that cabin when Holden told you he had the place under video surveillance?”

“Thought so. You weekend soldiers have no discipline. No sense of how to take orders or function as a team.” He couldn’t see Arruta’s face from this position, but it was pretty obvious she was enjoying herself.

Two could play this game. “How are you and Holden planning to explain a dead man? A naked dead man?”

“What’s to explain?” she asked dryly. “Blondie was obviously a dangerous lunatic, intent on raping Amber.” She clucked her tongue. “We saw this dangerous criminal creeping up on her cabin, naked as a bluejay, on our CCTV and acted.”

“If you have video footage, it’s of a snake not a man.”

“You see, that’s the beauty of a naked guy lying on the frozen ground.” Her complacent tones grated worse than the buckshot rolling between her tweezers. Another ball hit the pan.

“The sheriff didn’t want to see our footage. He wanted to know what that bastard was doing on Double B land in the altogether in March. He might send some deputies out to look for Blondie’s missing clothes, but my guess is he’ll ask Dog where they are. Dog will tell him, and that will be the end of it.”

“Last one,” she said. “I’ll disinfect the area and bandage it. You ought to be good as new in a week.”

“Thank you,” he managed.

“Thank you, ma’am,” she corrected. She rubbed his ass with the fires of hell.

Just for fun, I’ve made you a memory game from the Bear Fursuits covers. Play the game and post your time in the comments. Good luck!