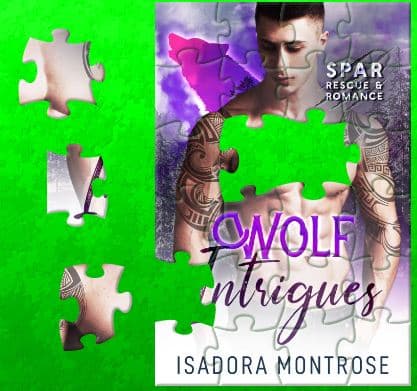 It’s been ages since I published so I’m thrilled to offer you Wolf Intrigues. Writing has been super hard this past year – for all the obvious reasons. I had to put off the publication date twice, which I’ve never done before.

SPAR Book 4 had more than the usual number of plot malfunctions before Sam and Avery found their happy ever after, but it was worth all the rewrites. I wanted some of the lightheartedness of the Mystic Bay books, to balance the suspense, so I brought back some of your favorite characters. Sheriff Wally Babcock and King Roger return for a bit of comic relief. As do the little foxes from Dazzled by a Dragon.

Werewolf Sam is charged with figuring out who blew up fox shifter Avery’s boat. As a SPAR keeper, Sam suspects everyone. Is Avery running an insurance scam? Is she a Vector freak who narrowly escaped her termination? And why is he drawn to this delicious vixen when he needs a wolf mate?

Avery is keeping secrets of her own – one big reason the plot kept going off the rails. But eventually she and Sam come to an understanding. Vector is thwarted, Avery’s home is kept safe, and Wally is satisfied that the evil-doers threatening Mystic Bay are facing justice.

You’re going to love this page turner. Enjoy this snippet.

He woke from the hottest of wet dreams to find his mate bringing his fantasies to life. She was nibbling on him. Licking, sucking, and kissing him everywhere. Her voluminous nightie had vanished, and she was seated on his belly facing his feet.

He cupped her bottom in his hands and gave the globes a little squeeze. “And good morning to you too.”

Her giggle tickled. She wiggled her ass encouragingly. He traced little circles on her like the ones her fingers were making on his flesh. Then she bent her head. He practically levitated.

She obliged. Each time bringing his ass off the bed. The pleasure was so intense it was almost pain. And then she moved over and performed the same trick on the right side. He hadn’t thought he could get any harder or tighter, but he had been wrong.

“Okay.” She kept on kissing him playfully.

“What about me being inside you?”

“You are.” Her voice was muffled.

“Two can play this game.” He sent a finger deep into her, stroking. He pressed harder. They flew together. He lifted her and turned her so she could lie with her head on his heart. Where she belonged.

“I love you,” he told her curls, although his own ears were full of the rushing of blood, louder than the surf. And over that tidal roar, he could hear singing in the distance, paranormal music sweeter even than the melodies of the most harmonic wolf pack.

In the aftermath, as his hands rubbed her back and brought her soul back into her body, they lay quietly together, their auras resonating in total harmony. Her heart pounded. He had said he loved her. Of course that was just what men said.

Eventually he said, “I think you have to explain exactly happened yesterday.”

So much for undying love. It was back to business. But she had nearly killed them both. He had a right to her secrets. Still, sharing was tough. Secrecy still too ingrained in her psyche.

She swallowed hard. “This is not to go beyond you. Promise.”

“If I can keep your secret without betraying my mission, you have my word.”

It wasn’t enough, but it was a solemn oath. Sam wouldn’t betray her secrets lightly. She drew a deep breath and prepared let go of her most closely held lore.